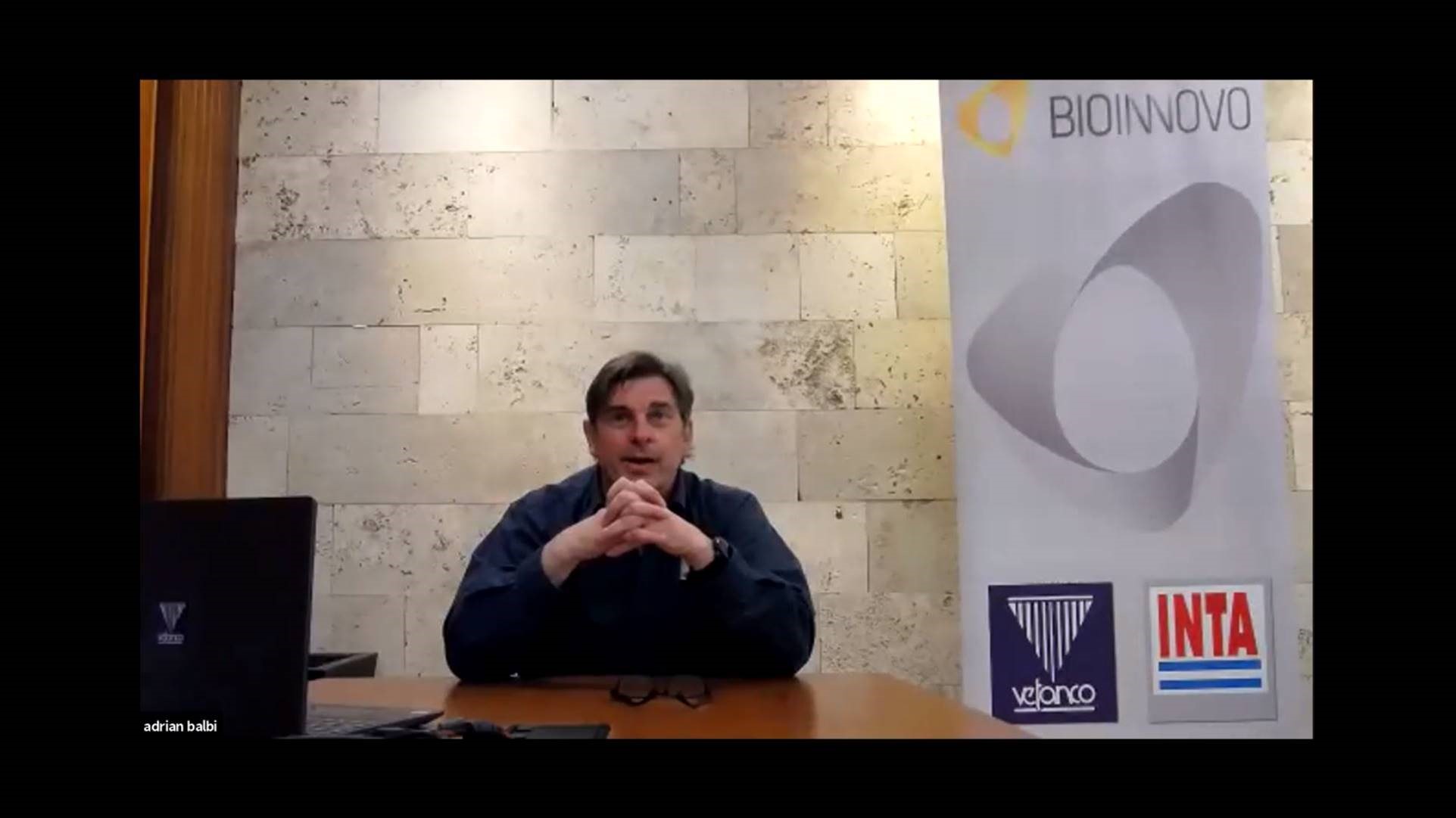 Second day of the International Congress on BVDV

The second day of the First International Congress on Bovine Viral Diarrhea Virus (BVDV) was held last Monday, August 2, and dealt with the different available vaccines and vaccination strategies to fight against this virus, responsible for millions of dollars in losses to national farms.

Bioinnovo, a public-private partnership between Vetanco and INTA, organized the First International Congress of Bovine Viral Diarrhea Virus, which was held virtually on two days and had the participation of more than 630 people, connected from 16 different countries of the region and the world. The first one took place on July 12 and the second day was held last Monday, August 2.

The Congress addressed the problems caused by the bovine diarrhea virus, which is present in more than 80% of the farms in Argentina, causing more than 42 thousand abortions annually. Some of the topics discussed in the Congress were control measures, consequences of the infection, classification and characteristics of available vaccines, and the field results with Vedevax Block, the first subunit vaccine against BVDV, developed by Bioinnovo.

Adrián Balbi, VM, Livestock Business Manager of Vetanco opened the last day of the event, which had two speakers. North American Dr. Shollie Falkenberg, Microbiology researcher of the US Department of Agriculture (USDA) gave the opening talk “Vaccines against Bovine Viral Diarrhea Virus: classification, characteristics, and field results” and focused on “the variables to be considered when designing a vaccination plan”. First, Falkenberg stated “we need to consider the immune response and duration of such response. However, the first item to be considered are the special needs of each facility,” which vary depending, for example if we are dealing with a feedlot or a breeding facility. “We need to take into account other applied variables or control measures to define what each facility needs and the most suitable type of vaccine to be applied,” she stated. She further said that “BVD has multiple presentations depending on the viral strain, the presence of secondary pathogens, the reproductive condition or the age of the animals,” and those variables need to be considered to select an appropriate vaccine.

As regards the vaccination strategy design, she recommended taking into account that “we need to prevent acute infection and associated symptoms and loss” and, above all, “focus on preventing fetal infection.”

The specialist also stated that vaccines provide “certain protections, because the formation of antibodies can be very helpful, however we have to be realistic: many of our vaccines (referring to US vaccines) have problems in field settings, especially when there are antigenic mismatches between vaccine strains and field strains.”

She then mentioned the advantages and disadvantages of each type of vaccine. MLV vaccines only need one dose, induce a faster, stronger and more lasting immune response; cause less allergic reactions and are cheaper. The disadvantages include a risk of abortion and immunosuppression and the need to be mixed on farm.

As regards inactivated vaccines, on the other hand, there is no risk of shed between the animals; there is a minimum risk of abortion; they are more stable; present no concerns as to the timing of vaccination and do not cause immunosuppression. On the downside, they can cause reactions on the vaccination site; they need two initial doses; they have a slower onset of immunity, which usually is less strong and lasting; and, besides, they are more expensive.

To summarize, she said that the variables to be considered when choosing a vaccine should be: immune response and duration of immunity; fetal protection; immunosuppression and cross-reactivity (she emphasized that we need to pay attention to antigen diversity and not so much to the different genotypes 1a, 1b, etc.).

The Argentine vaccine, the only one in the world

Dr. Demian Bellido, leader of the Bioinnovo recombinant bovine vaccine project, presented the field results of Vedevax Block, the first subunit vaccine targeted against BVDV. “It is a novel vaccine, unique in the world, as it combines the power of live vaccines with the safety of inactivated vaccines”. Bellido explained that it is a “subunit” vaccine, as it does not use all the virus to achieve immune response but only a part of it (the glycoprotein E2); and it is a “targeted” vaccine, as it contains an intelligent molecule that targets the immune system cells of the animal.

“The most important factor that affects the profitability of breeding facilities is the weaning of calves, because they are the raw material,” said Bellido, who further stated that “viral bovine diarrhea is a very important cause of reproductive problems: the BVDV is the most detected microorganism in the empty-cow disease and in abortions on the 1st, 2nd and 3rd pregnancy trimesters”.

Bellido then talked about the field tests of the vaccines, both in dairy farms and in breeding farms. In a farm in Córdoba province with 1000 breeding cows, it was possible to reduce reproductive losses due to BVDV from 8% to 4% with two doses of Vedevax Block.  In another breeding farm in the same province, with 9% reproductive loses, cows received a single dose of the vaccine, which reduced the losses to 6% and then to 3%. “The farm manager said that after applying the vaccine, there were no more births of deformed calves.” The Bioinnovo team also followed up more than 4000 animals in two facilities in the province of Salta. In one of them, heifer pregnancy rates were higher than 81%. Total calf losses between confirmed early pregnancy and weaning decreased from 14% to 6%, which resulted in 189 finished calves (from 314 calves lost in 2018 to just 125 in 2019). “When calculating the value of the weaned calf and the value per kilogram of beef, we see that vaccine use translates into a big economic difference,” he further stated.

As regards field tests in dairy farms, Bellido mentioned the results of four dairy farms in three different provinces (Santa Fe, Entre Ríos and Córdoba). The dairy farm of Santa Fe, which was the one analyzed in more detail, was very interesting, as the same company had four dairy farms in the same area. All cows on the farm with the worst reproductive performance received the vaccine, while the other three farms were used as controls. After vaccination, conception rates increased from 26% to 28%, and above all, there was a notorious reduction in abortions, from 30% in the previous year to 22% after vaccination with Vedevax Block. In two of the other three dairy farms of the company, abortions increased between 12% and 20%, whereas in the third one the rate remained the same as the previous year. This way, the dairy farm which reproductive performance was the worst, showed the best reproductive results after vaccination.

Similar results were observed in other two dairy farms in Entre Ríos and one in Córdoba. In all cases, there was an improvement in the pregnancy rate and a large reduction of abortions. These results have a great impact on herd productivity, as cows need to get pregnant and give birth to start producing milk.

Bioinnovo recommends applying two doses of the vaccine pre-service for primary vaccination and then an annual booster before the next servicing season. “This way, a cow reaches reproductive age with three cycles of vaccination. When you have more animals with high titers of antibodies in a farm, this hinders the virus circulation”.

Bellido emphasized that Vedevax Block “has a strong cellular and antibody response” as it is targeted to immune system cells (as opposed to traditional vaccines). “We have very good, high level responses that provide protection for cattle during all the year”.

Demian closed his presentation with the words of veterinarian Mario Sirven, recently deceased, who said “it is important not only to buy the technology, but also to use it in an appropriate manner to obtain the maximum benefits from it”.

There was a Q&A round in both days of the Congress.

Access the following links to watch the event again: