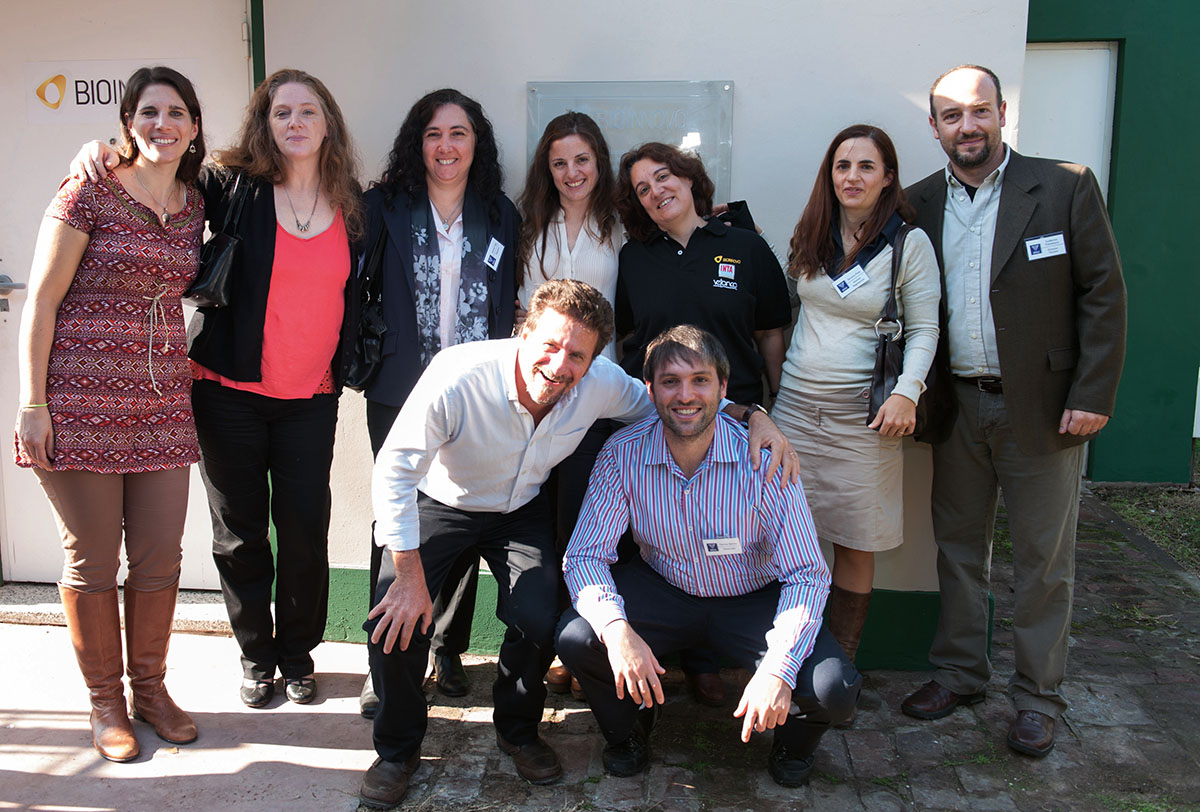 INCUINTA and Bioinnovo apply prior knowledge to fight against COVID19

There is no doubt: only science will save the world from the COVID19 pandemic. And it is in this field where our researchers rank high at a global level in the development of preventive and therapeutic technologies. Two new developments capable of neutralizing the virus have been added, either by means of nanoantibodies obtained from llamas (“nanobodies”) or from chicken eggs yolk immunoglobulins (IgY). “We have a large experience producing antibodies, and that was not a minor point in our effort to developed these tools.” Key concepts of Andrés Wigdorovitz and Viviana Parreño in their dialogue with MOTIVAR when describing the progress they made.

It’s important to remark that we are talking about two different platforms. One was developed by INCUINTA, jointly with CONICET, aimed to the generation of recombinant monoclonal antibodies (nanobodies) obtained from llamas. The other platform is the one developed by Bioinnovo, the first public-private partnership between INTA and Vetanco to produce antibodies from egg yolk (IgY), already in use for prophylactic and therapeutic treatments in cattle.

“This technology was introduced in the ‘90s and is based on camelids as this species has a different type of immunoglobulin G in their serum”, stated Dr. Viviana Parreño, of INCUINTA. She added: “The process starts by immunizing the llama, in this case with the spike protein of coronavirus, which induces the neutralizing antibodies. Blood is taken from the llama to create a library with sequences of antibodies against this antigen. Those that neutralize the virus are selected”.

Although in this case the work was conducted jointly with the team directed by Itati Ibañez from CONICET, INCUINTA has already developed other “nanobodies” against rotavirus, influenza, norovirus, rabies, Bovine viral diarrhea virus, Mal de Rio Cuarto (MRCV)  a viral disease of maize, among others. Similar research lines are ongoing in China, USA, Switzerland, Belgium and Sweden, where – as in Argentina- they are seeking to introduce these molecules into a physiological solution that can be administered to people by nebulization, covering the whole respiratory tract up to the bronchi. “This is a non-invasive way for the molecule to reach the site where the virus is multiplying and neutralize it, thus constraining the viral infection”, stated Parreño. And she added: “We want to test this product as a preventive agent, to reduce the risk of infection and also in patients that are already infected”. At this point, the researcher ensured to MOTIVAR that they are already in contact with the University of Virginia, in the United States, in order to start testing the molecules in a murine model.

“Thereafter, the product needs to be scaled up under GMP conditions, and only then tests in humans can be initiated. To get to that point we need a private partner equipped with the necessary infrastructure”, explained Parreño. Stressing the importance of the public-private partnership between INTA and Vetanco, Andrés Wigdorovitz focused on the work that Bioinnovo has been conducting in the field of the IgYs developed for neonatal calf diarrhea.

These immunoglobulins are antibodies formed as a response to inoculation of selected antigens in hens; the antigens may be obtained from bacteria, viruses, parasites or proteins. “We have a biological product in the veterinary market (Bioinnovo DNT), which is used for the prevention of bovine rotavirus and coronavirus. Based on this, and on all the experience accumulated by Marina Bok, a member of the team that developed her doctoral thesis on coronavirus, we generated polyclonal antibodies against SARS CoV2”, explained the INTA and Bioinnovo researcher. And then he added: “We joined the COVID 19 Consortium of the University of Buenos Aires, who supplied the RBD protein, so we  formulated a vaccine and immunize hens, since we know how and when to do it, at what dose and what technique to apply for harvest and purification. Bioinnovo has the know-how. In fact, we manufacture 15 tons a year of IgY DNT”.

Wigdorovitz stressed that the Malbrán Institute and the University of Virginia have endorsed the neutralizing power of the IgY obtained, and explained that it is likely that this product will be formulated as a soft tablet to be administered by oral route to protect the digestive tract; in Australia the same technology is being tested in humans by nasal route. “We are not targeting patients on critical condition, but getting promptly to individuals with symptoms with the purpose of applying this technology to quickly reduce the infection”, declared the expert.

MOTIVAR`s interviewees agreed not only in their passion for science but also on the key role played by researchers in modeling the future. “Our commitment has always been with the generation of innovations that provide solutions to actual problems. We are the product of the educational environment and will always work for demonstrating that it´s the way to transform reality”, stressed Andrés Wigdorovitz. Viviana Parreño concluded: “We are always thinking on contributing to the world one health system, and for that purpose it is strategic to count with  the commitment and investment of the private and public sector together”.

“It is all based on the development of knowledge networks” Vetanco and a team of INTA researchers have been now working together for more than 15 years.

Bioinnovo, the public-private company that links both entities, is the tool that´s transferring promising technologies from the lab to the farm.

Vedevax, the vaccine that aims the immune system to control the BVD virus, and Bioinnovo IgY DNT, are some of the lines we are currently working on.

The efficacy of the Bioinnovo products in neutralizing bovine Coronavirus and Rotavirus is well known, both from field results and from the official controls carried out by Senasa. The rational step forward in this context was to add to the continuous screening of possible uses of our platform for viral diseases of veterinary interest, a project to evaluate the applicability for control of COVID19, developing the IgY production against the RB protein.

After successful verifications at the Malbrán Institute, CONICET and Virginia Tech University, the innovation seems to be in a position to move into a new phase and so we aspire to join other options for the management of some cases of COVID19.

How do we achieve this and other milestones?

For Vetanco everything is based on the development of knowledge networks. To evolve as a corporation, the eternal aggregate of square meters of research labs has a physical limit, an economic limit and an efficiency limit. Therefore, we have been always continuously seeking for groups of excellence already functioning, and we try to include them in our network. In some cases partially, in others comprehensively.

This is how, for example, at the last World Vaccine Congress we presented Biotech Vac at a conference in which Dr. Antony Fauci participated. A product that was started by a researcher trained at the University of Arkansas, that later Vetanco put in value with the support of Fontar-Mincyt (grants from Ministry of Science and Tech) 9 years ago; later was tested in Brazil, INTA and Georgia Southern Poultry, and that has manufacturing agreements in a plant in the United States. Where it will be registered for the Northern Hemisphere, while locally Vetanco produces it at the CDV Laboratory plant, allied for this project in Argentina, in order to  develop new alternatives and distribute  it in the Southern Hemisphere together.

Likewise, the Bioinnovo case highlights the great work of many INTA researchers, who in collaboration with Vetanco continue to search for new applications and uses for these platforms. Little of this would have been possible without the implementation of shared work in a knowledge and economy network framework.