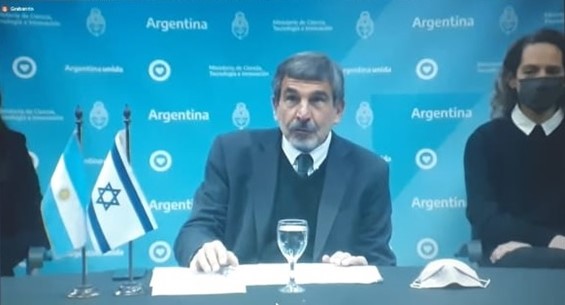 Bioinnovo, recognized in the 6th edition of the Israel Innovation Awards

The virtual awards ceremony of the 6th edition of the “Israel Innovation Awards” took place on July 14th. The event was organized by the Ministry of Science, Technology and Innovation of the Argentine Republic, the Israeli Embassy in Argentina  and the Argentine-Israel Chamber of Commerce. The event featured the participation of Roberto Salvarezza, Minister of Science, Technology and Innovation of Argentina; Galit Ronen, Israeli Ambassador in Argentina; Mario Montoto, President of the Israel-Argentina Chamber of Commerce; and Sergio Urribarri, Argentine Ambassador in Israel. Roberto Salvarezza, Minister of Science, Technology and Innovation of Argentina Mario Montoto, President of the Argentine-Israel Chamber of Commerce

In this framework, Andrés Wigdorovitz, Scientific Director at Bioinnovo, presented the project titled “APCH1 – new targeting strategy for recombinant vaccines,” for which he was awarded a special mention prize that includes advisory and a work space at Estudio Kelman & Asociados for 6 months.

The APCH1 molecule, that has been granted protection by (PCT/ES2008/070053.P080101073), has the capacity to digest the viral antigen to the antigen-presenting cells of the immune system, in this way boosting the immune response it induces in vaccinated animals.

In the case of the Bovine Viral Diarrhea Virus, the targeted vaccine Vedevax, the first targeted vaccine that uses APCH1, has shown to be capable of protecting the animals for a period of 12 months, thus achieving a response that is 30 to 50 times more powerful than the conventional inactivated vaccines commercialized in our country.

Having been one of the 10 short-listed projects out of 100 competing projects, Bioinnovo now has a 100% scholarship to conduct the “Entrepreneurship Workshop” of the Center for the Development of Entrepreneurs and Exporters (CEDEX) of the University of Palermo.