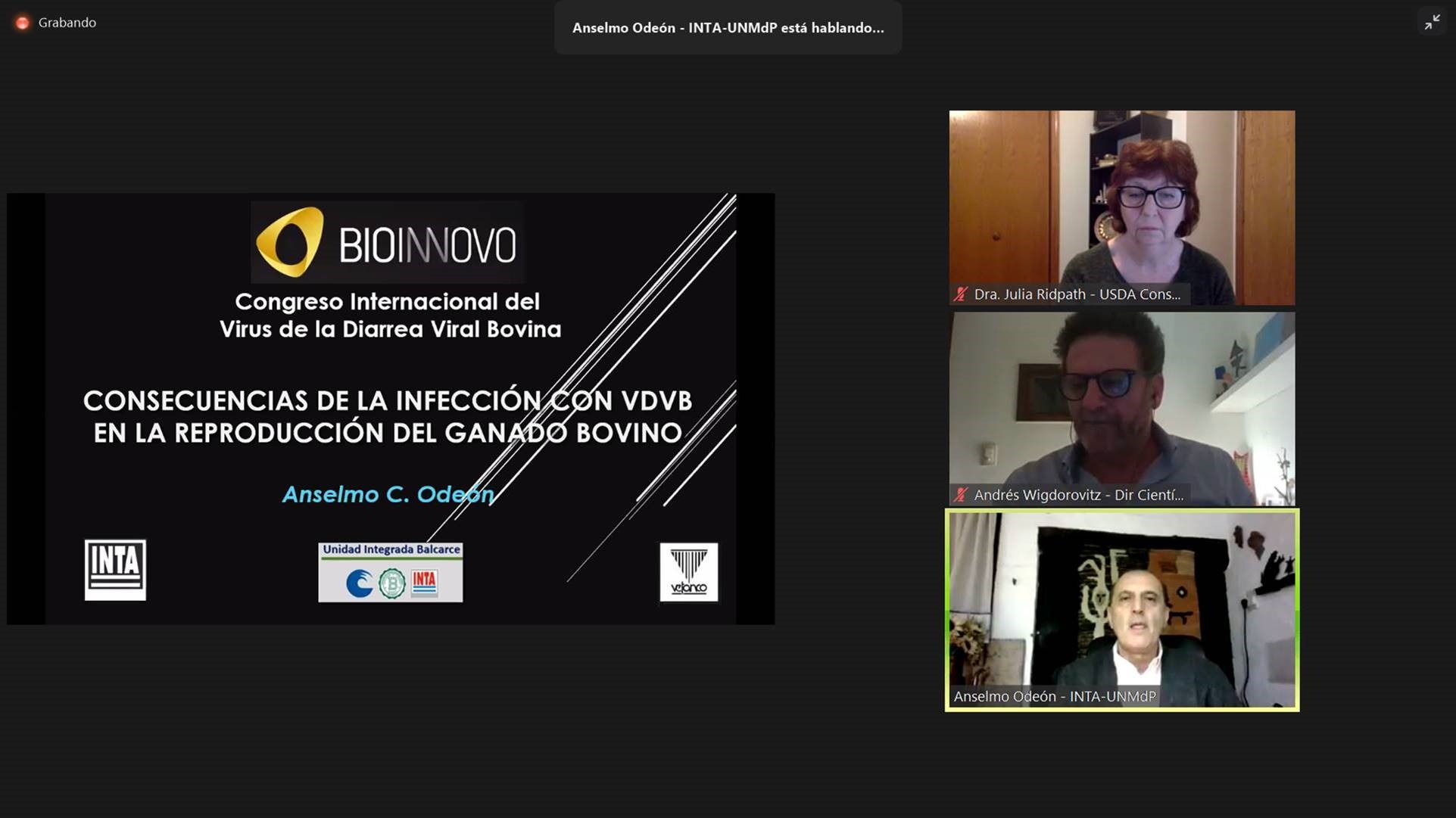 On Monday, July 12 the International Congress of Bovine Viral Diarrhea Virus (BVDV) was initiated addressing the problems raised by the disease in cattle as well as its enormous economic losses and alternatives for its control.

Bioinnovo, the public-private company formed by Vetanco and INTA, has organized the First International Congress on Bovine Viral Diarrhea Virus (BVDV); the first congress day was held on Monday, July 12.  The second session day will take place on Monday, August 2 through an online platform.

The first day, attended by over 550 participants from more than 18 countries from our region and the world at large, featured a presentation by one of the major world experts in BVDV, Dr. Julia Ridpath, and by the national and international leader in BVDV and viral diseases of cattle, Dr. Anselmo Odeón, from INTA, Director of Graduate Studies in Animal Production and Health at the School of Agrarian Sciences, National University of Mar del Plata.

INTA´s Animal Health Program coordinator, Dr. Ariel Pereda opened the meeting and when referring to the situation of cattle breeding in Argentina he sated “the problem of stock stagnation for technical, economic and political reasons restricts the supply of beef in the domestic and external markets. Other countries with similar production systems as ours are much more efficient.” Argentina records a weaning rate of 60% and a rectal palpation-weaning difference of about 10%, this, he said “results in losses of 1200 to 1400 dollars per season. It is not only a production problem, but also represents economic and financial concern for farmers. This has to do with animal health, and also with management, nutrition, genetics and a number of other critical factors.”

In this framework, Pereda added that diseases such as Bovine Viral Diarrhea (BVD) “originate the greatest losses because of their impact on reproductive issues.”

“Immunosuppression is the most common effect of these viruses,” stated Ridpaph, who worked at the National Animal Disease Center (NADC) in Ames, Iowa, an agency of the U.S. Department of Agriculture (USDA), where she was responsible for the BVDV research project, studying the pathogens that cause BVD and the best ways to diagnose it, and developing control strategies.

She also stated that BVD is caused by 3 viral species of the pestivirus genus (VDVB1, VDVB2 and HoBi-Like, recently discovered). These viruses are of one of 2 biotypes, cytopathic or non-cytopathic; the latter, differently from what it appears, are more virulent since “they hide from the immune system” and may cause prolonged and persistent infections.

In a herd “there will be a variety of clinical expressions of BVD, depending on the age (mostly in young animals or pregnant cows) and on the immune status.”

Infections occur as a result of direct or indirect contact with the oropharyngeal mucosa (sneezes, tears, contaminated colostrum, etc.) or via the reproductive tract (mostly contaminated semen). As for the possibility of viral transmission through feeding or drinking troughs, she said that there is no full evidence, although “common sense tells us that these sites are potential transmission sources.”

The specialist added that it is not a good strategy to maintain PIs in the herd to obtain “herd immunity”, since this situation calls for a big effort of the immune system in each animal, and therefore creates great stress, thus preventing the animal from performing other functions such as reproduction, growth or milk production. “It is costly to leave a PI in the herd, it implies a form of drip loss that negatively affects the income of the farm.”

She also warned about the risk implied in selecting animals based only on manifestations of the disease instead of running tests, since some individuals may seem “normal” but are Persistently Infected.

BVD has the advantage that, by only detecting one case, it is possible to start making health care decisions to protect the whole herd: when PI animals are identified, it is ideal to implement screening and “eliminate all of them,” she added.

For screening she recommended PCR and antigen-capture ELISA as the most sensitive diagnostic methods and said that both serum and ear cartilage are good samples.

During his presentation, Dr. Anselmo Odeón, described that BVDV causes “two-way” infections: an “acute” infection, that is seasonal and generally shows reproductive tract infection, and congenital infections originated during gestation that occur in animals born from a Persistently Infected (PI) cow or a cow that got infected during gestation. In the case of bulls, there can also be two ways of infections, and transmission takes place through semen. “Although the origin of infection differs, bulls are always a risk factor for the transmission of BVDV.”

With his work team at INTA Balcarce, Odeon studied the effect of BVDV in the in-vitro reproduction of embryos in PI heifers, which turned out to present “a significant difference between the number of divided oocytes and attained embryos”, compared to a control lot. “This restricts the growing potential of the embryos and, consequently, these animals have lower fertility rates.”

BVD shows “clinical manifestations such as repetition of heats and low pregnancy rates and is difficult to diagnose.”  He added that the disease causes embryo mortality, persistent infection, abortions, congenital malformations, and late infections.

As for embryo mortality, he cited studies that proved that when the virus infects the embryo, differences occur in conception at first service, as well as embryo losses and lower gestation rates. Regarding abortions, he noted that BVD “does not cause a high incidence and many infections do not end up in abortion”, since “bovine fetuses are capable of managing infection.”

Most common malformations caused by BVD are birth of hairless, blind animals or with incoordination problems (unable to walk, wobbly gait). “Calves are born with lesions in cerebral hemispheres (hydrocephalus) and in the cerebellum (dysplasia).”

Late infections occur as from the sixth month of gestation and calves may be born normal, with no virus detection, but in many cases are weak or low weight animals that are likely to die. Cases of persistently infected animals occur when the mother gives birth to PI calves.

“The importance of detecting the origin of BVD, be it by acute infection or PI is that the 90% that originate in the acute phase, whose detection is more difficult, will have a low contagion rate as long as they have colostral antibodies; but later will be high virus shedders.” On the contrary, those born from PI mothers- a minority- do not have antibodies, but are easily detectable and have a high rate of contagion because they permanently shed virus.”

“It is important to consider viral detection in calves; if the animals are selected as breeders, they will always shed virus through semen and transmit infection by horizontal and vertical routes.”

Odeon stated that “the economic impact of having a PI in the herd is direct: lower pregnancy rates, lower production and higher calf mortality. A small difference in pregnancy rates implies 650.000 pesos a year.”

The INTA specialist provided the “keys” to control the disease: detection of PI animals, adequate vaccination plans, and appropriate biosecurity measures (strict control in the purchase of gestating animals or bulls that might be infected).

After the presentations there was a Q&A session.

During the second day, Monday August 2, starting at 6:30 pm, Dr. Shollie Falkenberg, from the National Animal Disease Center (NADC), in Ames, Iowa, an agency of the U.S. Department of Agriculture (USDA) will make a presentation titled “Vaccines against the Bovine Viral Diarrhea Virus: classification, characteristics and field results”.

Also, Dr. Demian Bellido, leader of the Recombinant Bovine Vaccine Project at Bioinnovo-Vetanco, will present the field results of Vedevax Block, the first targeted subunit vaccine against BVDV. Then, there will be a Q&A round. Adrian Balbi, DVM, Livestock Business Manager of Vetanco will close the event. The event is free and will provide open access and Spanish translation. It will be held on the Zoom platform. It is aimed at professionals, veterinarians, producers, scientists, graduate and undergraduate students in Veterinary, Agricultural, Animal Production, and Biological Sciences.